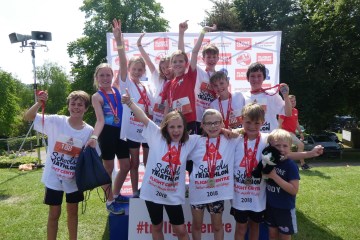 This will be the second year that the team is leaping into action and taking part in the Flight Centre Schools Triathlon in support of Restless Development. In an exclusive interview with Mollie, Florence, Carys and Camille (left to right), team ˜Leaping Leopards’ from Ramsbury Primary School told Restless Development why they’re so excited to take part again.

It just looked so fun! It’s also my three favourite sports: swimming, cycling and running. We’re definitely going to do this year and I can’t wait for the delicious ice creams at the finish line again! – Camille

The Flight Centre Schools Triathlon is an inclusive event for children aged 7-12, of all sporting abilities. Whether you’re an avid triathlete, or you just want to have a fun day out with friends and family, everyone has their own challenges and their own goals they want to reach.

When we asked the ˜Leaping Leopards’ what their goals were for this year’s triathlon, they said ˜We’re going to try and get better and faster! We also want to beat our fundraising target!’

The Leaping Leopards raised £385 for Restless Development last year – check out the impact they had on our work around the world! The team found that sharing their JustGiving page around friends and family really helped them reach above and beyond their target. Carys also shared her page with local sporting clubs, including her dad’s Iron Man club.

The team focused very hard on their training last year. Carys joined a triathlon club and trained every week. She went cycling with her dad and went swimming three times a week!

The whole team shared their top tips for the day.

Our advice for running is to pace yourself,’ said Mollie and Florence. ˜You only know your pace and what your body is capable of if you’ve done some training before, so don’t just start one week before.’

˜If you’ve paced yourself’ said Camille ˜that means you can go really really really fast at the end, until you’ve got no energy and you’re just lying down at the end of the finish line!’

We’re so grateful for their support and can’t wait to see all the teams in action again this year!