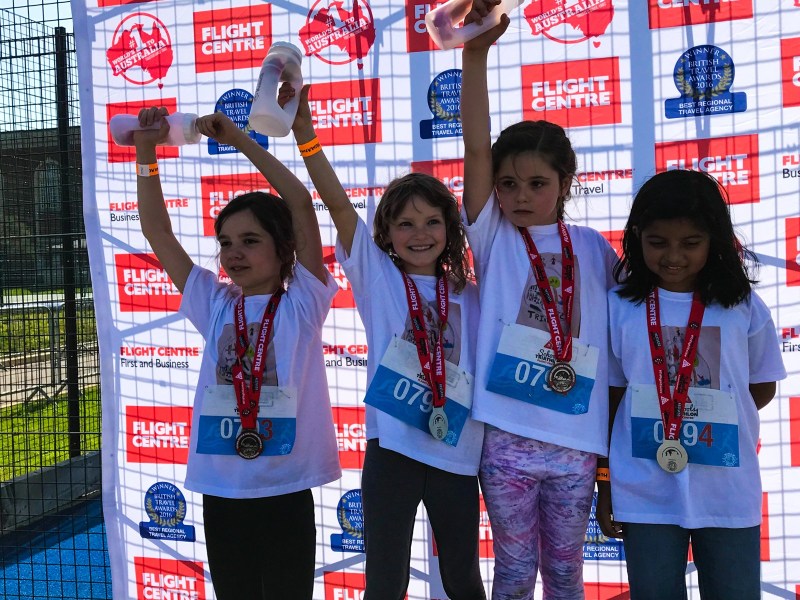 Since 2015, over 9,000 young people have taken part in the Flight Centre Schools Triathlon – an event that challenges children aged 7-12 to swim, cycle and run to raise money for charity. To date, the series has raised over £1 million for Restless Development and over 60 school charities.

Sophie was 7 years old when she decided to take on her first triathlon to "help young people advocating for change in their communities and get fit." She trained hard in preparation for the day, and had a blast at the event. Sophie’s favorite moment was "running across the finish line with my team, with our hands in the air."

Sophie worked even harder to fundraise for the event raising an incredible £2,700 in her first year! Sophie now has three triathlons under her belt and has raised nearly £10,000 for Restless Development and various charities that her school has chosen to support during term. We spoke with Sophie and her parents to find out how she did it and asked her to share some tips on how to smash a fundraising target.

1. The power of a personalised fundraising page.

As soon as Team Amazing Animals registered for the Flight Centre Schools Triathlon, Sophie worked with mum and dad to set up a fun and personalised JustGiving page to share with friends and family.

Sophie said it was important to:

Take pictures of your training and make a front cover – the more dramatic it is the more people will give money! Ask friends and family to donate as much as they can.

Sophie uploaded a fantastic action shot from her last triathlon, and shared some information about Restless Development and the challenge she had set herself. Whenever Sophie and the team went to the local park to train, they took photos and shared them with supporters to provide updates on how everyone was preparing for the big day.

2. You can’t go wrong with a bake sale

The bake sale is a well known fundraising winner. It worked for Sophie, and could work for you too! Sophie perfected her cookie recipe and sold lots to raise as many pennies and pounds as possible in the months leading up to the triathlon!

Sophie’s loves chocolate chip cookies and has perfected a recipe at home. Her mum said she helped by bringing them into work for my colleagues to eat and give whatever donation they felt. People gave generously!!

What really tipped Sophie’s fundraising over the edge was match fundraising. Match fundraising is an easy and effective way for parents to help triathletes smash their targets! Sophie’s mum and dad both asked their employers and they were more than happy to help a budding athlete! With their support, Sophie was able to triple the £1,000 raised from her own hard work and increase her total to £3,000!

In November, we invited Sophie to our end of year celebrations event where she met with Perry, our CEO at Restless Development. Perry raised a toast and asked the whole room to join him in applauding Sophie’s achievements.

Sophie is an inspiring advocate for change to young people in her school, and a critical partner in our work. It is thanks to partnerships with people like Sophie that Restless Development are able to reach over 500,000 young people worldwide every year, enabling them to solve the challenges we face in our world. Sophie plays and essential role in this change and we thank her for her commitment and support year after year.

Sophie is a true example of young people helping young people. Thank you Sophie for all your hard work and see you April 2020 for another Flight Centre Schools Triathlon!