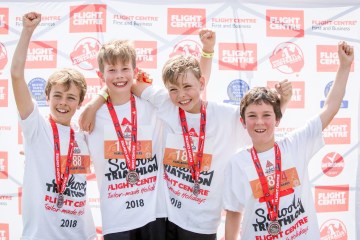 How did you raise so much money?

‘My mum wrote to a UK company and they matched our donation! We raised £200 just by doing that. She is magic!’ (Jamie) Find out more about match fundraising from our website.

After Katherine delivered the Restless Development School Assembly, Keelin Mathias the School Business Manager from Ramsbury Primary School, said ˜It’s great for the Year 6s to hear the statistics because it really helps them understand the impact they are having on Restless Development’s work around the world.’

For Jamie, it was important to hear about the facts and figures to help with his fundraising. ˜You feel more passionate about fundraising when you know you’re making a huge difference.’ Find out more about Restless Developments work around the world.

How did you first get involved with the Flight Centre Schools Triathlon?

˜I went for it the first time and got my first medal. I really enjoyed it, so decided to do it again last year! It was really incredible. It’s become my annual thing now. Every year I’m going to do it, and I’m definitely going to do it this year!’ – Nick

˜I’d never heard about the triathlon and then Jamie and Nick asked me to take part in their team with them. I decided to give it a go and I really really enjoyed it! I’m doing it this year because I’m keen to improve my time.’ – Charlie

'And to cheer them on! For the swimming, we’re quite close together so you can shout your support all the time. But when it comes to the cycle and the run, it’s great to just stick your hand out for a high-five and encourage them to keep going!’ – Nick

The Flight Centre Schools Triathlon is open to children aged 7-12 of all sporting abilities, so it’s ok if you don’t feel as confident at swimming, cycling or running. It’s the perfect opportunity to practise and learn these important life skills.

It’s not about who comes first, second and third. The Flight Centre Schools Triathlon celebrates success around the values of teamwork, determination, respect and self-belief that you can achieve great things!

Jamie feels he’s not good at cycling. ˜My bike is actually really rusty in the back of the garage, but I’ll still take part because it’s such a fun day!’

Charlie isn’t a big fan of running, but he says he takes part in the Flight Centre Schools Triathlon: ˜To get better at it and to raise money for a good cause!’

Nick confessed that he didn’t really enjoy swimming at all, but he still wanted to give it a go! Going into his third triathlon this year, he now really really loves swimming!

Good luck to the Ramsbury Rockers!

The Flight Centre Schools Triathlon is one of the largest sporting charity events aimed at young people in the UK. Since 2015, More than 9,000 participants have taken part, raising an incredible £740,000 for Restless Development and Local Charities. This year we want to break-through £1 Million!